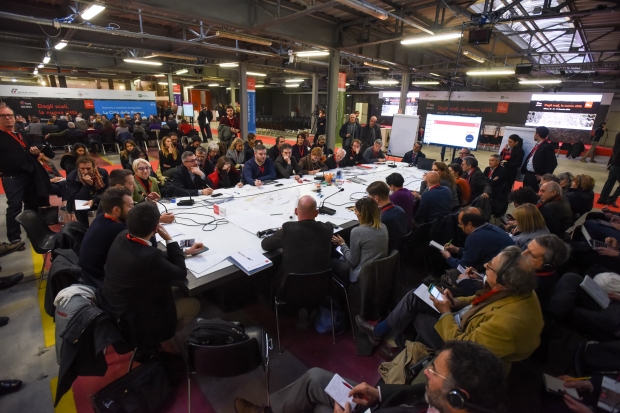 The municipality of Milan, the national railway company (FS) called a large and diverse group of actors to participate in the three-day Scali Milano workshop on December 15-17 2016.

Throughout the city of Milan 7 unused railway yards are in need of an urban re-development. These areas, relict of the times when most of freight travelled by rail up to the periphery of the city, are cuts and holes in the urban fabric. The municipality and FS, owner of the area, have been in negotiations for a long time, in order to define a future for these plots. Different needs and strategies need to balance each one, within a very delicate and complex economic, political and administrative negotiation.

During the workshop large (too large) multi stakeholder tables worked on the themes of Connectivity, Culture, Resources, Green and Liveability with the aim of stimulating a strategic discussion with a long-term vision for the areas which would guide future proposals, to be picked up and synthetized by design firms.

Participants worked on Principles, Indicators leading to the scenarios which would be developed by international designers.

Carlo of IAMC participated in the “Resources” roundtable, and while it’s fair to say that the complexities to be taken into account are enormous, the workshop was very confused and dispersive. Too large tables, sometimes poor handling by facilitators, the role of “hand picked” design firms (in some cases with limited local knowledge) and more importantly a lack of clear objectives did not produce decisive outcomes.

As one participant pointed out, it wasn’t clear who is the “customer” of this work: the municipality (who rightly wants to have a oversight on the future of these areas), the landowners (FS), citizens, investors? Nevertheless, despite its difficulties, the fact that such events are organized, is a sign of openness to the city, as processes do not need to happen behind closed doors.